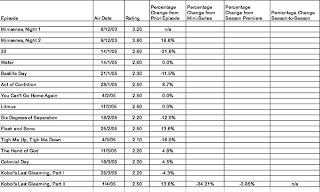 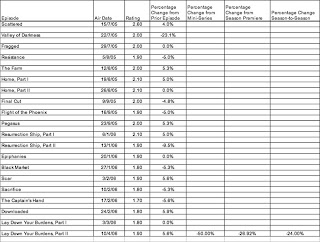 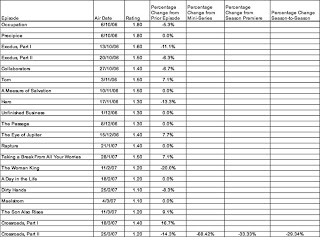 * Thanks to BST (Pete) for the charts and the maths, which made this article possible.
Posted by Lizardo! at 11:15

You forgot to mention the massive advertising campaigns, including the canvassing of the shopping malls.

JJ, I completely forgot about that. In the end though all that crap was a waste of money – people should have been flocking to the show like flies around a turd but all the positive press in the world couldn't make that happen.

Give us more original, fun science fiction/space fantasy to watch and down with rip off, horrible crap like GINO and pompous, windbag hacks like Ronald D Moore.

It's the best show on television. Why should it be popular, too?

It's the best show on television. Why should it be popular, too?

Heh, I just like mentioning the mall crap whenever GINO marketing is mentioned. It was just such an absurd laughable cry for someone/anyone to watch, it should always be mentioned in this regard accompanied by a good hearty laugh.

What's amazing is not the ratings drop but the fact that NBC Universal/SciFi kept the show on the air for as long as they did.

BTW, WWE wants to pump up the ratings for ECW on SciFi.
So much that in August they are going to start taping ECW on Monday nights before the live Raw show. Currently ECW is taped before Smackdown on Tuesdays. Due to them doing the shows back to back the ECW and Smackdown wrestlers often appear on each show.
But Raw is more popular. So starting in August the Raw wrestlers can appear on ECW and vis e versa.

Are you people still saying this bullshit as if it's gospel?